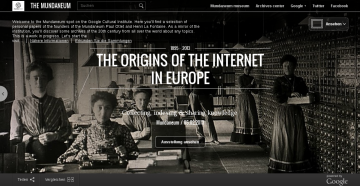 I know what is your research on Paul Otlet is about, but can you describe very briefly from your view, the steps that Google took to co-opt his legacy?

I sometimes wished we could simply point at the evil megacorporation but it was not Google who initiated the co-option of Otlet's legacy. They created the desire for it and for sure happily accepted the gift of posthumous European roots, but in this story they have been comfortably passive in their approach.

It seems that Elio di Rupo (former prime minister of Belgium, chairman of the Socialist Party) foresaw a potential for 'his' region in the 90's. He used his political influence to move the remains of the physical archive of Otlet from Brussels to Mons, and prepared the grounds for the mess we are witnessing today. The same Di Rupo was negotiating the arrival of the Google data-center in Saint Ghislain, a modest 10 kilometers away from the current Mundaneum archive center. He was also involved in setting up the collaboration agreement between the megacorporation and The Mundaneum Archive Center, signed in his presence in 2013.

From the side of the Mundaneum, there has been a lot of work in pursuing or even staging the story that "Otlet invented the Internet" and subsequently, that "Otlet was the visionary inventor of Google".

According to the responsible archivist Stephanie Manfroid, at one point the megacorporation has proposed the Federation Bruxelles Wallonie (formal owner of the archive) a contract to systematically digitize the archive, which was refused by the Federation. The digital documents that subsequently appeared on the Google Cultural Institute website were supposedly released "for communication purposes".

The Mundaneum decided to redirect their own institutional URL: http://digitalarchives.mundaneum.org to the GCI section dedicated to them points to Mundaneum's own website. This erases all sense of difference between the public and the commercial 'institutes'. Also, the draconian terms and conditions of Google are maintained so the borders between responsibility, rights and ownership are being blurred. Since February this year, Mundaneum has started to publish some of its digital documents on Wikimedia Commons[1] under correct conditions so that is encouraging.

Do you think there is relation between the cultural agenda of Google and the legal and administrative oversight the EU wants to have over their monopoly?

Of course, and there is no surprise in that. Like most corporate sponsors, the 'cultural' agenda of the megacorporation is aligned with a need to create and maintain good relations with its subjects/clients, though in the case of the megacorporation this goodwill is established on a planetary scale. GCI can take their pseudo-governmental stance because it does not need to directly serve commercial needs, just because they can. By building 'strong partnerships' with public institutions such as Mundaneum but also for example Ghent University library, they manage to keep attention on their mission to "organize the world's information and make it universally accessible and useful", away from being an advertising company that is good at avoiding taxes. It is also strategically convenient that Mundaneum and the Ghislain data-center are located in a French-speaking area but not in France, a country that played hard to get for a long time.

In the mean time, something might be changing though. The collaboration contract between Mundaneum and Google was signed a year before the actual trouble with the EU began, and it is interesting to observe that besides links to Google Cultural Institute, there is no mention of Google support on Mundaneum's current website and print material. In addition, it seems that the megacorporation is slowly closing down its large-scale ingestion programs. We can only guess at the motivation, let alone worry about the consequences.

What are your views on The Google Cultural Institute in general?

That it has nothing to do with what we should expect from Culture, nor with what we should demand from an Institution. From the perspective of the megacorporation, culture is just another type of information to be accessed, whereby all that access means is allowing people to call up an image in a slick interface, hopefully with an infantile description attached. By lazily approaching cultural heritage as documents in need of scanning, similar to what they do with Google Books, the megacorporation does not have to engage in the destabilizing and critical potential of culture, let alone invest in a platform for people to think their place in the world. By staying shallow, they can reap the reassuring effects of 'heritage' and 'archive', and in the case of Mundaneum there's a bonus of a retro-activated European history. It creates a situation of "emperors clothes" that is painful to witness in times of austerity and budget cuts, when strong cultural and critical institutions are needed more than ever. Instead they start to behave like naive promotion centers for corporate agendas, in unison with local politics. It shows how much public institutions are not just structurally corrupt but actively contribute to the corruption of language, allowing the borders (or the URLs) between concepts to blur. Was it you who brought up the Stockholm Syndrome?

What is the kind of relation that museums and cultural institutions funded by public money should have with GCI or do they have to be related at all?

Under current funding conditions, it seems hard to avoid relations with corporate partners. These conditions are double edged: there is a lack of government support, while the same government demands/uses institutions to promote corporate agendas. In the case of Mundaneum I am not sure what the megacorporation contributes in terms of money; it seems most of all about 'communication opportunities' solicited by the Mundaneum itself. That mode of being is of course a pathology, a consequence of the way megacorporations operate through what you call 'techno-colonialism'.

I find it a problem that agreements between public institutions and corporations are not interrogable due to Non Disclosure Agreements. It is even more ridiculous when digitized material, in the public domain and owned by a governmental body, is being published under corporate licenses, under conditions that do not allow copying, re-use and re-distribution. I think publicly funded archivists and knowledge workers should not spend their time filling the pages of corporate websites, and when they do so they need to think hard of mirrors and backups that allow them to pull out whenever they need to, or want to.

In the case of Mundaneum, we see a publicly funded cultural institution using their scarce resources to provide the backdrop for acting out the similarities between a row of card catalogs and a megacorporation server. By suggesting that Otlet's vision was only made successful once technological innovation could be combined with global business, the same institution that should care for the complex and at times poetic oeuvre of Otlet, dislocates it from time and context, and robs it from any specificity. It reaffirms the tragic impossibility of realising Utopian ideas and positions the megacorporation once again as the benevolent 'provider of universal services'.

What is the role of independent cultural producers to counter the influence and technocolonialism currently pushed by Google?

It is important now, to imagine how institutions, infrastructures, practices of archiving and the materiality of the documents themselves might interact differently. Publicly funded cultural institutions should be the breeding grounds for developing this kind of collective intelligence, to build confidence in and with the public domain, inviting people to work together and critically reflect on long term strategies in response to the disastrous effects of global cognitive capitalism. Sigh. So independent cultural producers (or 'differently dependents') could try to remind public institutions of their own potential, be it through facilitating dialogue with those institutions, finding their own practices of resistance and reflection, acts of citizen journalism, devising detox programs, guerrilla actions and piracy or even by setting up parallel institutions.

I think it is exactly because of the urgency of the situation that we should resist bold gestures, and find the patience to build a relation to these histories in ways that makes sense. We will need to be both responsive to and responsible for the specific material entanglements that we will encounter. The point of those modest operations, is to build the collective courage to persist in demanding access to both the documents and the intellectual and technological instruments that interface them. Only than can we develop infrastructures for knowledge production that go beyond the current techno-determinist paradigm. And for this, access to infrastructure and data is a prerequisite, but imagination is indispensable.

Some remarks you think are important or that i should follow up?

I am interested in forms of 'techno-colonialist-detox' you might find, and see if and how they can cross cultural contexts. There is obviously something in the clash between local and planetary forces at play that needs attending to.

I also would like to know more about relations between different 'cultural services' offered by Google. Do people setting up Dev-art have strategic meetings with the director of Cultural Institute? Is there truly a separation between Google Books and Cultural Institute, and how does that work? What to think about the governmental (NGO?) language that seems to creep into megacorporation activities, or is that phase already over?
Retrieved from "https://www.mondotheque.be/wiki/index.php?title=Google_Cultural_Institute&oldid=2486"
Category: