This Radiated Book started three years ago with an e-mail from the Mundaneum archive center in Mons. It announced that Elio di Rupo, then prime minister of Belgium, was about to sign a collaboration agreement between the archive center and Google. The newsletter cited an article in the French newspaper Le Monde that coined the Mundaneum as 'Google on paper' [1]. It was our first encounter with many variations on the same theme.

The former mining area around Mons is also where Google has installed its largest datacenter in Europe, a result of negotiations by the same Di Rupo[2]. Due to the re-branding of Paul Otlet as ‘founding father of the Internet’, Otlet's oeuvre finally started to receive international attention. Local politicians wanting to transform the industrial heartland into a home for The Internet Age seized the moment and made the Mundaneum a central node in their campaigns. Google — grateful for discovering its posthumous francophone roots — sent chief evangelist Vint Cerf to the Mundaneum. Meanwhile, the archive center allowed the company to publish hundreds of documents on the website of Google Cultural Institute.

While the visual resemblance between a row of index drawers and a server park might not be a coincidence, it is something else to conflate the type of universalist knowledge project imagined by Paul Otlet and Henri Lafontaine with the enterprise of the search giant. The statement 'Google on paper' acted as a provocation, evoking other cases in other places where geographically situated histories are turned into advertising slogans, and cultural infrastructures pushed into the hands of global corporations.

An international band of artists, archivists and activists set out to unravel the many layers of this mesh. The direct comparison between the historical Mundaneum project and the mission of Alphabet Inc[3] speaks of manipulative simplification on multiple levels, but to de-tangle its implications was easier said than done. Some of us were drawn in by misrepresentations of the oeuvre of Otlet himself, others felt the need to give an account of its Brussels' roots, to re-insert the work of maintenance and caretaking into the his/story of founding fathers, or joined out of concern with the future of cultural institutions and libraries in digital times.

We installed a Semantic MediaWiki and named it after the Mondothèque, a device imagined by Paul Otlet in 1934. The wiki functioned as an online repository and frame of reference for the work that was developed through meetings, visits and presentations[4]. For Otlet, the Mondothèque was to be an 'intellectual machine': at the same time archive, link generator, writing desk, catalog and broadcast station. Thinking the museum, the library, the encyclopedia, and classificatory language as a complex and interdependent web of relations, Otlet imagined each element as a point of entry for the other. He stressed that responses to displays in a museum involved intellectual and social processes that where different from those involved in reading books in a library, but that one in a sense entailed the other. [5]. The dreamed capacity of his Mondothèque was to interface scales, perspectives and media at the intersection of all those different practices. For us, by transporting a historical device into the future, it figured as a kind of thinking machine, a place to analyse historical and social locations of the Mundaneum project, a platform to envision our persistent interventions together. The speculative figure of Mondothèque enabled us to begin to understand the situated formations of power around the project, and allowed us to think through possible forms of resistance. [6]

The wiki at http://mondotheque.be grew into a labyrinth of images, texts, maps and semantic links, tools and vocabularies. MediaWiki is a Free software infrastructure developed in the context of Wikipedia and comes with many assumptions about the kind of connections and practices that are desirable. We wanted to work with Semantic extensions specifically because we were interested in the way The Semantic Web[7] seemed to resemble Otlet's Universal Decimal Classification system. At many moments we felt ourselves going down rabbit-holes of universal completeness, endless categorisation and nauseas of scale. It made the work at times uncomfortable, messy and unruly, but it allowed us to do the work of unravelling in public, mixing political urgency with poetic experiments.

This Radiated Book was made because we wanted to create a moment, an incision into that radiating process that allowed us to invite many others a look at the interrelated materials without the need to provide a conclusive document. As a salute to Otlet's ever expanding Radiated Library, we decided to use the MediaWiki installation to write, edit and generate the publication which explains some of the welcome anomalies on the very pages of this book.

The four chapters that we propose each mix fact and fiction, text and image, document and catalogue. In this way, process and content are playing together and respond to the specific material entanglements that we encountered. Mondotheque, and as a consequence this Radiated book, is a multi-threaded, durational, multi-scalar adventure that in some way diffracts the all-encompassing ambition that the 19th century Utopia of Mundaneum stood for.

Embedded hierarchies addresses how classification systems, and the dream of their universal application actually operate. It brings together contributions that are concerned with knowledge infrastructures at different scales, from disobedient libraries, institutional practices of the digital archive, meta-data structures to indexing as a pathological condition.

Disambiguation dis-entangles some of the similarities that appear around the heritage of Paul Otlet. Through a close-reading of seemingly similar biographies, terms and vocabularies it re-locates ambiguity to other places.

Location, location, location is an account of geo-political layers at work. Following the itinerant archive of Mundaneum through the capital of Europe, we encounter local, national and global Utopias that in turn leave their imprint on the way the stories play out. From the hyperlocal to the global, this chapter traces patterns in the physical landscape.

Cross-readings consists of lists, image collections and other materials that make connections emerge between historical and contemporary readings, unearthing possible spiritual or mystical underpinnings of the Mundaneum, and transversal inclusions of the same elements in between different locations.

The point of modest operations such as Mondothèque is to build the collective courage to persist in demanding access to both the documents and the intellectual and technological infrastructures that interface and mediate them. Exactly because of the urgency of the situation, where the erosion of public institutions has become evident, and all forms of communication seem to feed into neo-liberal agendas eventually, we should resist simplifications and find the patience to build a relation to these histories in ways that makes sense. It is necessary to go beyond the current techno-determinist paradigm of knowledge production, and for this, imagination is indispensable. 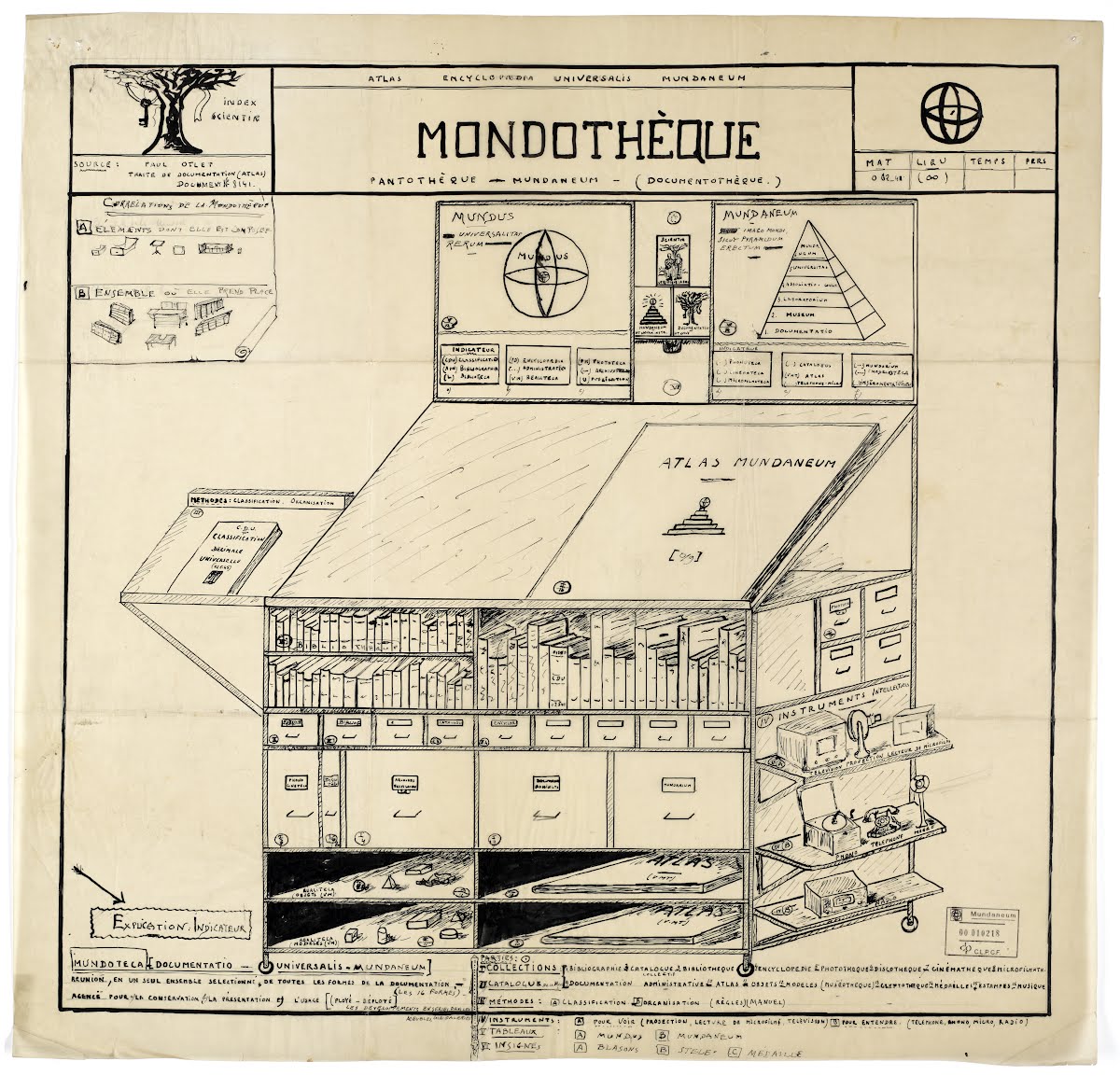