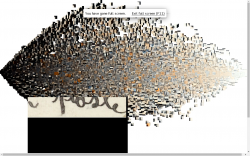 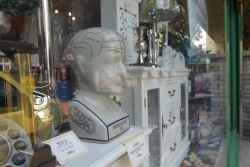 Hasty recordings of several escape attempts. A slew of tentacle-thoughts are rising towards the ethereal opening and here I am / hopeful and unwashed \ just beneath a submundane landscape of groping, shimmering arms, hungry to sense and to collect every memory detail in an effort of sense making, to draw skin over hypotheses and hypotheses over bones. It might be morning, it might be yesterday's morning out there or any other time in the past, when as I cracked the door to my workplace, I entered my co-workers' question game and paraverbal exchange:

Puckered lips open: “Listen, whose childhood dream was it to have one of their eye-bulbs replaced with a micro fish-eye lens implant?” Knitted eyebrows: “Someone whose neural pathways zigzagged phrenologist categories?” Microexpressionist: “How many semiotician-dentists and woodworm-writers have visited the Chaos Institute to date?” A ragged mane: “The same number as the number of neurological tools for brain mapping that the Institute owns?” {one lengthy word crossed out, probably a name}: “Would your brain topography get upset and wrinkle if you imagined all the bureaucrats' desks from the largest country on earth [by pop.] piled up in a pyramid?” Microexpressionist again: “Who wants to draft the call for asemic writers?” Puckered lips closes {sic} the door. 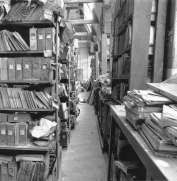 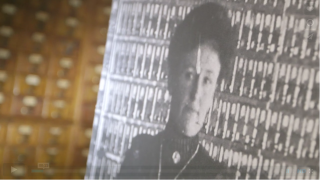 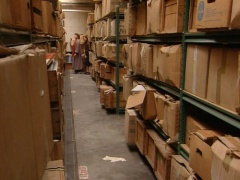 It's a humongous workplace, with a blue entrance door, cluttered with papers on both sides. See? Left hand on the entrance door handle, the woman presses it and the three of them [guiding co-worker, faceless cameraman, scarlet-haired interviewer] squeeze themselves inside all that paper. [Door shuts by itself.] Doesn't it feel like entering a paper sculpture? [, she herself appearing for a split second to have undergone a material transformation, to have turned into paper, the left side of her face glowing in a retro light. It's still her.] This is where we work, a hybrid site officially called The Institute for Chaos and Neuroplasticity – packed with folders, jammed with newspapers, stacks of private correspondence left and right, recording devices, boxes with photographs, xeroxed documents on shelves, {several pea-sized inkblots} printed screenshots and boarding passes – we keep it all, everything that museums or archives have no interest in, all orphaned papers, photographic plates and imperiled books or hard disks relatives might want to discard or even burn after someone's death. Exploring leftovers around here can go up and down to horrifying and overwhelming sensorial levels...

Sociological-intelligence rumors have it that ours is the bureau for studying psychological attachment to “garbage” (we very much welcome researchers), while others refer to the Institute as the chaos-brewing place in the neighborhood because we employ absolutely no classification method for storing papers or other media. The chances of finding us? [Raised eyebrows and puckered lips as first responses to the scarlet-haired question.] Well, the incidence is just as low as finding a document or device you're looking for in our storage. Things are not lost; there are just different ways of finding them. A random stroll, a lucky find – be that on-line or off-line –, or a seductive word of mouth may be the entrance points into this experiential space, a manifesto for haphazardness, emotional intuitions, subversion of neural pathways, and non-productive attitudes. A dadaist archive? queried Scarlet Hair. Ours is definitely not an archive, there's no trace of pyramidal bureaucracy or taxonomy here, no nation state at its birth. Hence you won't find a reservoir for national or racial histories in here. Just imagine we changed perception scales, imagine a collective cut-up project that we, chaos workers, are bringing together without scissors or screwdrivers because all that gets through that blue door [and that is the only condition and standard] has already been shaped and fits in here. [Guiding co-worker speaks in a monotonous and plain GPS voice. Interview continues, but she forgets to mention that behind the blue door, in this very big box 1. everyone is an authorized user and 2. time rests unemployed.]

Lately, several trucks loaded with gray matter have been adding extra hours of induced chaos to everyone's content. Although it is the Institute's policy to accept paper donations only from private individuals, it occasionally makes exceptions and takes on leftovers from nonprofit organizations.

Each time this happens, an extended rite of passage follows so as to slightly delay and thereby ease the arrival of chaos bits: the most reliable chaos worker, Microexpressionist by metonymically selected feature, supervises the transfer of boxes at the very beginning of a long hallway [eyeballs moving left to right, head planted in an incredibly stiff neck]. Then, some fifty meters away, standing in front of the opened blue door, Puckered Lips welcomes newcomers into the chaos, his gestures those of a marshaller guiding a plane into a parking position. But once the gray [?] matter has passed over the threshold, once the last full suitcase or shoe box with USB sticks has landed, directions are no longer provided. Everyone's free to grow limbs and choose temporal neighbors. 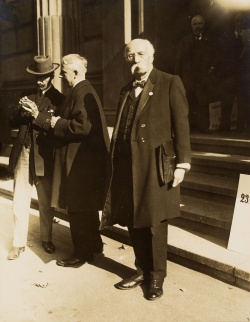 … seated cross-legged at the longest desk ever, Ragged Mane is randomly extracting photodocuments from the freshest chaos segment with a metallic extension of two of her fingers [instead of a pince-nez, she's the one to carry a pair of tweezers in a small pocket at all times]. “Look what I've just grabbed,” and she pushes a sepia photograph in front of Knitted Eyebrows, whose otherwise deadpan face instantaneously gets stamped this time with a question mark: “What is it?” “Another capture, of course! Two mustaches, one hat, three pairs of glasses, some blurred figures in the background, and one most fascinating detail!” – [… takes out a magnifying glass and points with one of her flashy pink fingers to the handheld object under the gaze of four eyes on the left side of the photo. Then, Ragged Mane continues:] “That raised right index finger above a rectangular-shaped object... you see it?” “You mean [00:00 = insertion of a lengthy time frame = 00:47] could this mustachioed fellow be holding a touchscreen mobile phone in his left hand?” For several unrecorded skeptical moments, they interlock their eyes and knit their eyebrows closer together. Afterward, eyes split again and roll on the surface of the photograph like black-eyed peas on a kitchen table. “It's all specks and epoch details,” a resigned voice breaks from the chaos silence, when, the same thought crosses their minds, and Ragged Mane and Knitted Eyebrows turn the photo over, almost certain to find an answer. [A simultaneous hunch.] In block letters it most clearly reads: “DOCUMENTING THE FILMING OF PEACEMAKERS / ANALOGUE PHOTOGRAPHY ON FILM SET / BERN, SWITZERLAND / 17.05.2008” 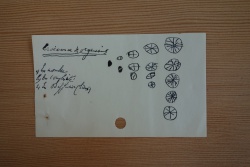 / meanwhile, the clock-horse has grown really nervous out there – it's drawing smaller and smaller circles / a spasmodic and repetitive activity causing dislocation / a fine powder begins to float inside the oubliette in the slowest motion possible / my breathing has already been hampered, but now my lungs and brain get filled with an asphyxiating smell of old paper / hanging on my last tentacle-thought, on my tiptoes, refusing to choke and disintegrate / NOT READY TO BE RECYCLED / {messiest handwriting}

A Cyrillic cityscape is imagining how one day all the bureaucrats' desks from the largest country on earth get piled up in a pyramid. “This new shape is deflating the coherence of my horizon. [the cityscape worries] No matter!” Once the last desk is placed at the very top, the ground cracks a half-open mouth, a fissure the length of Rxssxx. On the outside it's spotted with straddled city topographies, inside, it's filled with a vernacular accumulation of anational dust without a trace of usable pasts.

{violent horizontal strokes over the last two lines, left and right from the hole at the bottom of the index card; indecipherable} 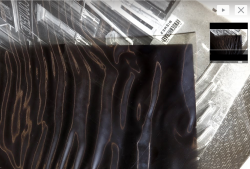 “What's on TV this afternoon?” This plain but beautifully metamorphosed question has just landed with a bleep on the chaos couch, next to Ragged Mane, who usually loses no chance to retort [that is, here, to admonish too hard a fall]: “Doucement!” Under the weight of a short-lived feeling of guilt, {name crossed out} echoes back in a whisper – d – o – u – c – e – m – e – n – t –, and then, as if after a palatable word tasting, she clicks her tongue and with it, she searches for a point of clarification: “Doucement is an anagram for documenté – which one do you actually mean?” [All conversations with {name crossed out} would suffer unsettling Meaning U-turns because she specialized in letter permutation.]