… it must have been only last month that I began half-chanting-half-mumbling this looped sequence of sentences on the staircase I regularly take down to work and back up to dream, yet it feels as if it were half a century ago. Tunneling through my memory, my tongue begins burning again and so I recollect that the subject matter was an agonizing, unutterable obsession I needed to sort out most urgently. Back then I knew no better way than to keep bringing it up obliquely until it would chemically dissolve itself into my blood or evaporate through the pores of my skin. To whisper the obsession away, I thought not entirely so naïvely, following a peculiar kind of vengeful logic, by emptying words of their pocket contents on a spiraling staircase. An anti-incantation, a verbal overdose, a semantic dilution or reduction – for the first time, I was ready to inflict harm on words! [And I am sure, the thought has crossed other lucid minds, too.] 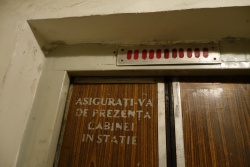 During the first several days, as I was rushing up and down the stairs like a Tasmanian devil, swirling those same sentences in my expunction ritual, I hardly noticed that the brown marbled staircase had a ravenous appetite for all my sound making and fuss: it cushioned the clump of my footsteps, it absorbed the vibrations of my vocal chords and of my fingers drumming on the handrail. All this unusual business must have carried on untroubled for some time until that Wed. [?] morning when I tried approaching the employee at the reception desk in the hideously large building where I live with a question about elevator safety. I may take the elevator once in a blue moon, but I could not ignore the new disquieting note I had been reading on all elevator doors that week: 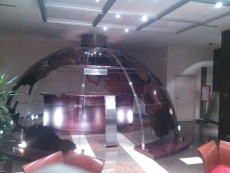 Walking with a swagger, I entered the incandescent light field around the fancy semicircular, brown reception desk, pressed down my palms on it, bent forward and from what I found to be a comfortable inquiry angle, launched question mark after question mark: “Is everything alright with the elevators? Do you know how worrisome I find the new warning on the elevator doors? Has there been an accident? Or is this simply an insurance disclaimer-trick?” Too many floors, too many times reading the same message against my will, must have inflated my concern, so I breathed out the justification of my anxiety and waited for a reassuring head shake to erase the imprint of the elevator shaft from my mind. Oddly, not the faintest or most bored acknowledgment of my inquiry or presence came from across the desk. From where I was standing, I performed a quick check to see if any cables came out of the receptionist's ears. Nothing. Channels unobstructed, no ear mufflers, no micro-devices. Suspicion eliminated, I waved at him, emitted a few other sounds – all to no avail. My tunnel-visioned receptionist rolled his chair even closer to one of the many monitors under his hooked gaze, his visual field now narrowed to a very acute angle, sheltered by his high desk. How well I can still remember that at that exact moment I wished my face would turn into the widest, most expensive screen, with an imperative, hairy ticker at the bottom –

That's one of the first red flags I remember in this situation (here, really starting to come across more or less as a story): a feeling of being silenced by the building I inhabited. [Or to think about it the other way around: it's also plausible and less paranoid that upon hearing my flash sentences the building manifested a sense of phonophobia and consequently activated a strange defense mechanism. In any case, t]hat day, I had been forewarned, but I failed to understand. As soon as I pushed the revolving door and left the building with a wry smile [on my face], the traffic outside wolfed down the warning.

The day I resigned myself to those forces – and I assume, I had unleashed them upon myself through my vengeful desire to hxxx {here, a 3-cm erasure} words until I could see carcass after carcass roll down the stairs [truth be said, a practice that differed from other people's doings only in my heightened degree of awareness, which entailed a partially malevolent but perhaps understandable defensive strategy on my part] – that gloomy day, the burning untitled shape I had been carrying in my mouth morphed into a permanent official of my cavity – a word implant in my jaw! No longer do I feel pain on my tongue, only a tinge of volcanic ash as an aftermath of this defeat.

I've been running with a word in my mouth, running with this burning untitled shape, and I just can't spit it out. Spit it with phlegm from a balcony, kiss it in a mirror, brush it away one morning. It has become my tooth, rooted in my nervous system. My word of mouth. 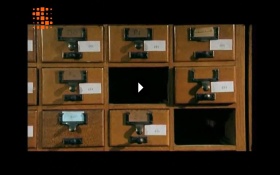 Since then, my present has turned into an obscure hole, and I can't climb out of it. Most of the time, I'm sitting at the bottom of this narrow oubliette, teeth in knees, scribbling notes with my body in a terribly twisted position. And when I'm not sitting, I'm forced to jump. Agonizing thoughts numb my limbs so much so that I feel my legs turning to stone. On some days I look up, terrified. I can't even make out whether the diffuse opening is egg- or square-shaped, but there's definitely a peculiar tic-tac sequence interspersed with neighs that my pricked ears are picking up on. A sound umbrella, hovering somewhere up there, high above my imploded horizon.

Hypotheses scanned and merged, I temporarily conclude that a horse-like creature with metal intestines must be galloping round and round the hole I'm in. When I first noticed the sound, its circular cadence was soft and unobtrusive, almost protective, but now the more laps the clock-horse is running, the deeper the ticking and the neighing sounds are drilling into the hole. I picture this as an ever rotating metal worm inside a mincing machine. If I point my chin up, it bores through my throat! 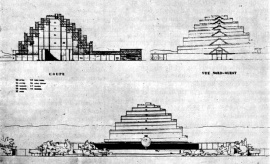 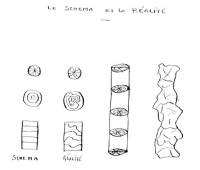 What if, in returning to that red flag in my reconstructive undertaking [instead of “red flag”, whose imperialist connotations strike me today, we cross it out and use “pyramid” to refer to such potentially revealing frames, when intuitions {two words crossed out, but still legible: seem to} give the alarm and converge before thoughts do], we posit that an elevator accident occurred not long after my unanswered query at the High Reception Desk, and that I – exceptionally – found myself in the elevator car that plummeted. Following this not entirely bleak hypothesis, the oubliette I'm trapped in translates to an explainable state of blackout and all the ticking and the drilling could easily find their counterparts in the host of medical devices (and their noise-making) that support a comatose person. What if what I am experiencing now is another kind of awareness, inside a coma, which will be gone once I wake up in a few hours or days on a hospital bed, flowers by my side, someone crying / loud as a horse / in the other corner of the room, next to a child's bed?

[Plausible as this scenario might be, it's still strange how the situation calls for reality-like insertions to occur through “what if”s...]

Have I fallen into a lucid coma or am I a hallucination, made in 1941 out of gouache and black pencil, paper, cardboard and purchased in 1966?

[To visualize the equation of my despair, the following elements are given: the above-whispered question escalates into a desperate shout and multiplies itself over a considerable stretch of time at the expense of my vocal chords. After all, I am not made of black pencil or cardboard or paper. Despite this conclusion, the effort has left me sulking for hours without being able to scribble anything, overwhelmed by a sensation of being pinched and pulled sideways by dark particles inside the mineral dampness of this open tomb. What's the use of a vertical territory if you can't sniff it all the way up?]