Difference between revisions of "The Internet on paper"

Presentation March 18 in Bergen, Norway. Contribution to The extensions of many, a seminar curated by Dušan Barok for BEK, Bergen Center for Electronic Arts.

“Humanity is at a turning point in its history. The mass of available information is formidable. New instruments are necessary for simplifying and condensing it, or the intellect will never know how to overcome the difficulties which overwhelm it, nor realise the progress that it glimpses and to which it aspires”.

Otlet considered radio, cinema, micro-fiche, phonograph and television all worthy substitutes for the book as information carrier. He envisaged them interconnected into a ‘radiated library’, an intellectual multi-media machine that would support the publication, consultation and creation of knowledge. 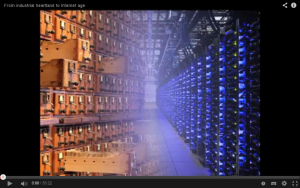 From industrial heartland to the Internet age (screen-capture). Video published by The Mundaneum, 2014

Since 1993, the remains of Otlet’s extensive collection of documents are being cared for by The Mundaneum archive center in Mons. Located in a former mining region in the south of Belgium, Mons is also right next to Google’s largest datacenter in Europe. Due to the recent re-branding of Otlet as ‘founding father of the Internet’, and ‘visionary inventor of Google on paper’, The Mundaneum has called international attention to his oeuvre. The Internet giant thankfully accepted the gift of posthumous francophone roots, and adopted The Mundaneum in return.

‘The Internet on paper’ traces various narrations of media in and around the work of Paul Otlet. It is a contribution in the context of Mondothèque, a platform for experiments by artists, archivists and activists concerned about the state of infrastructures for knowledge production.

Whatever we may try to understand, the process of communication is always conditioned by techniques of articulation. Knowledge can hardly be replicated from one embodied mind across others simply because language, images and sounds are the stuff in between and tear us apart. 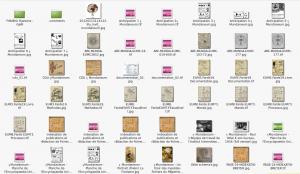 Retrieved from "https://www.mondotheque.be/wiki/index.php?title=The_Internet_on_paper&oldid=1703"
Facts about "The Internet on paper"
RDF feed