A bag but is language nothing of words

We must bring together a collection of machines which simultaneously or sequentially can perform the following operations: (1) The transformation of sound into writing; (2) The reproduction of this writing in as many copies as are useful; (3) The creation of documents in such a way that each item of information has its own identity and, in its relationships with those items comprising any collection, can be retrieved as necessary; (4) A Classification number assigned to each item of information; the perforation of documents correlated with these numbers; (5) Automatic classification and filing of documents; (6) Automatic retrieval of documents for consultation and presented either direct to the enquirer or via machine enabling written additions to be made to them; (7) Mechanical manipulation at will of all the listed items of information in order to obtain new combinations of facts, new relationships of ideas, and new operations carried out with the help of numbers. The technology fulfilling these seven requirements would indeed be a mechanical, collective brain. [1]

In text indexing and other machine reading applications (such as Google's core business of search) the term "bag of words" is frequently used to underscore how processing algorithms often represent text using a reductive data structure where the original order of the words in sentence form is stripped away. In a recent blog post, Michael Erasmus explains the technique in the context of "tf-idf": http://michaelerasm.us/tf-idf-in-10-minutes/:

First, let's just define what I mean with document. For our purposes, a document can be thought of all the words in a piece of text, broken down by how frequently each word appears in the text.

Say for example, you had a very simple document such as this quote:

This structure is also often referred to as a Bag of Words. Although we care about how many times a word appear in a document, we ignore the order in which words appear.

While "bag of words" might well serve as a cautionary reminder to programmers of the essential violence perpetrated to a text and a call to critically question the efficacy of methods based on subsequent transformations, the expression's use seems in practice more like a badge of pride ... a schoolyard taunt that would go: Hey language: you're nothin' but a big BAG-OF-WORDS. In this way BOW celebrates the apparently perfunctory step of "breaking" a text into a purer form amenable to computation, to stripping language of its silly redundant repetitions and foolishly contrived stylistic phrasings to reveal its cleaner inner essence. 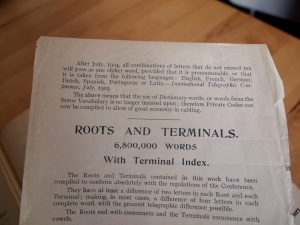 On the shift to the "machine-centric":

The interaction between code and language shows a steady movement away from a human-centric view of code toward a machine-centric view, thus anticipating the development of full-fledged machine codes with the digital computer. [3]

On the relation to a *universal language*:

Along with the invention of telegraphic codes comes a paradox that John Guillory has noted: code can be used both to clarify and occlude (2010b). Among the sedimented structures in the technological unconscious is the dream of a universal language. Uniting the world in netw

In a Google April fools "prank" (where fake product announcements are made each April 1st, reportedly the product of Google's famous "20%" time for "side" projects ) [1]

Claiming to be developed by "Reed Morse", great grandson of Samuel Morse the developer of the telegraph.

What's notable about Google's (mock) interface of telegraphy is that it although they cite people's frustrations with modern devices having"too many buttons" they end up presenting an interface with two when the telegraphic interface was just one, and was routinely operated "blind" while the operators eyes read the message and perhaps made notation on paper while. While made in jest, the misunderstanding is telling as the performative interface of the telegraphs single button, is translated to one where the essential and initial form of the message is symbolic, containing those two binary symbols "dot" and "dash". 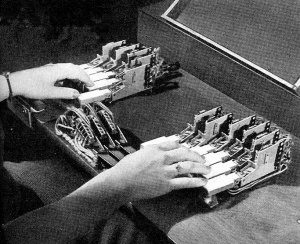 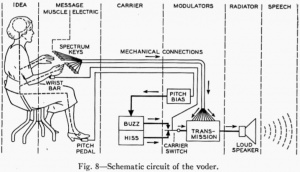 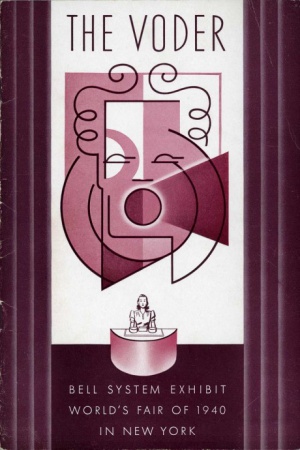 At the 1940 New York World's Fair, the VODER speaking machine system was demonstrated in sensational fashion. The system was developed by Homer Dudley, an engineer at AT&T Bell labs.

It's far and away much more human sounding than any text to speech system of today. Why? Because of the way it's performed. Rather than starting from written language broken into approximate translation of phonetic fragments and then applying a slew of statistical and other techniques in an attempt to bring back some sense of the natural expression of a human voice, the voder system merely offers its user a palette of sounds and leaves it to the operator to perform them.

Who saw you?
She saw me

Whom did whe see?
She saw me

Did she see you or hear you?
She saw me

Extracting Patterns and Relations from the World Wide Web

The World Wide Web provides a vast source of information of almost all types,

ranging from DNA databases to resumes to lists of favorite restaurants. However, this information is often scattered among many web servers and hosts, using many different formats. If these chunks of information could be extracted from the World Wide Web and integrated into a structured form, they would form an unprecedented source of information. It would include the largest international directory of people, the largest and most diverse databases of products, the

greatest bibliography of academic works, and many other useful resources

Here we define our problem more formally: Let D be a large database of unstructured information such as the World Wide Web

A traditional algorithm could not compute the large itemsets in the lifetime of the universe. [...] Yet many data sets are difficult to mine because they have many frequently occurring items, complex relationships between the items, and a large number of items per basket. In this paper we experiment with word usage in documents on the World Wide Web (see Section 4.2 for details about this data set). This data set is fundamentally different from a supermarket data set. Each document has roughly 150 distinct words on average, as compared to roughly 10 items for cash register transactions. We restrict ourselves to a subset of about 24 million documents from the web. This set of documents contains over 14 million distinct words, with tens of thousands of them occurring above a reasonable support threshold. Very many sets of these words are highly correlated and occur often.[4]

Tim Berners Lee and the urge to "liberate your documents"

So, we're at the stage now where we have to do this -- the people who think it's a great idea. And all the people -- and I think there's a lot of people at TED who do things because -- even though there's not an immediate return on the investment because it will only really pay off when everybody else has done it -- they'll do it because they're the sort of person who just does things which would be good if everybody else did them. OK, so it's called linked data. I want you to make it. I want you to demand it. [5]

The computer scientists view of textual content as "unstructured", be it in a webpage or the pages of a scanned text, underscore / reflect the negligence to the processes and labor of writing, editing, design, layout, typesetting, and eventually publishing, collecting and cataloging. (cf here [6]?)

In other words, by "unstructured" it is meant: unstructured in relation to the machine -- that is, not explicitly structured in a format directly amenable to use by automated means. "Structuring" then is a process by which structure is made explicit through the use of standards of markup (such as HTML/XML). In this way, the computer scientist is viewing a text through the eyes of their reading algorithm, and in the process (voluntarily) blinding themselves to the work practices which have produced, and maintain, the given textual resources, choosing to view them as instead somehow "freely given" and available to exploit as a "raw material".